Home > Curriculum
Latin is important to learn for many reasons, but especially because it helps linguistic skills and understanding, and it teaches students a method of learning that will complement any subject.

Latin is not really a dead language; it is simply hidden well in many other languages that go by different names.

Because Latin is a systematic language, it trains the mind to learn in a systematic way.
Over 80% of English has Latin and Greek roots and over 50% has strictly Latin roots.
English vocabulary tests reveal that students of Latin score higher than students of other foreign languages.

The precision of the Latin language also requires the student to hone the skills of observation, comparison, and generalization.

Western society today owes much to its Christian heritage and an educational system that has been largely discarded. In a culture that believes that new always means better, what works is often discarded for a “new and innovative approach.” That is why the “sight reading method” replaced phonics and why the “new math” of memorizing methods replaced understanding why these very same methods work. The results have been disastrous.

The shift away from a “classical education” came in America and England during the mid-1800s. A few farsighted people warned of the consequence and tried to convince the educators to rethink their methods. One such person was the British author, Dorothy Sayers. She wrote an essay entitled, The Lost Tools of Learning. In it, she calls for a return to the “Trivium” used by western teachers down through the ages. The Trivium was designed to follow the natural developmental stages of children. It consisted of three distinct phases: grammar, logic, and rhetoric.

Doug Wilson, a founding board member of the first school to return to the Trivium, explains the classical method in his book, Recovering the Lost Tools of Learning.

An excerpt from Doug Wilson’s book, Recovering the Lost Tools of Learning:
“The structure of our curriculum is traditional with a strong emphasis on the ‘basics.’ We understand the basics to be subjects such as mathematics, history, and language studies. Not only are these subjects covered, they are covered in a particular way. For example, in history class the students will not only read their text, they will also read from primary sources. Grammar, logic, and rhetoric will be emphasized in all subjects. By grammar, we mean the fundamental rules of each subject (again, we do not limit grammar to language studies), as well as the basic data that exhibit those rules. In English, a singular noun does not take a plural verb. In logic, A does not equal not A. In history, time is linear, not cyclic. Each subject has its own grammar, which we require the students to learn. This enables the student to learn the subject from the inside out.

The logic of each subject refers to the ordered relationship of that subject’s particulars (grammar). What is the relationship between the Reformation and the colonization of America? What is the relationship between the subject and the object of a sentence? As the students learn the underlying rules or principles of a subject (grammar) along with how the particulars of that subject relate to one another (logic), they are learning to think. They are not simply memorizing fragmented pieces of knowledge.

The last emphasis is rhetoric. We want our students to be able to express clearly everything they learn. An essay in history must be written as clearly as if it were an English paper. An oral presentation in science should be as coherent as possible. It is not enough that the history or science be correct. It must also be expressed well.”

Many Christian schools with good intentions say that they have a “Christ-centered education.” By “Christ-centered,” they mean that they have prayer in the classroom and a Bible course required by all students. However, many times the curriculum and worldview are the same as those in private or public schools. So often students leave their sheltered Christian schools totally unprepared for the onslaught of an atheistic “higher education” system. Most Bible-believing Christians leave college questioning their faith, and at times, becoming non-believers.

At RCCA, we believe that a Christ-centered education requires that Christ be at the “center of all learning.” All learning must be more than just adding God’s Word to our studies, but viewing all subjects through the lens of God’s Word. At all levels of teaching, in every subject, we must acknowledge that all things come from God and that every aspect of life must be subject to Him. Students should be shown that human knowledge and wisdom are incomplete at best and at worse, totally wrong.

Children at the earliest age should be taught to process ideas and stories from a biblical worldview. As the child reaches the age of reason, he or she can be taught to think logically and identify inconsistencies in reasoning. A Christ-centered education does not shy away from the world and its vain imaginations, but rather, engages it with truth and reveals its inconsistencies and intents.

To succeed in our quest to give students a Christ-centered education, we commit to provide clear role models of biblical Christian life through our faculty and staff. We will strive to remove any and all forms of hypocrisy, while encouraging every student to develop his personal relationship with God.

We want our students to be able to express clearly everything they learn. An essay in history must be written as clearly as if it were an English paper. An oral presentation in science should be as coherent as possible. It is not enough that the history or science be correct. It must also be expressed well.”

Here is our curriculum for 2022-2023. If you have any questions, please feel free to contact us. This curriculum is also available to download and/or print by clicking here. 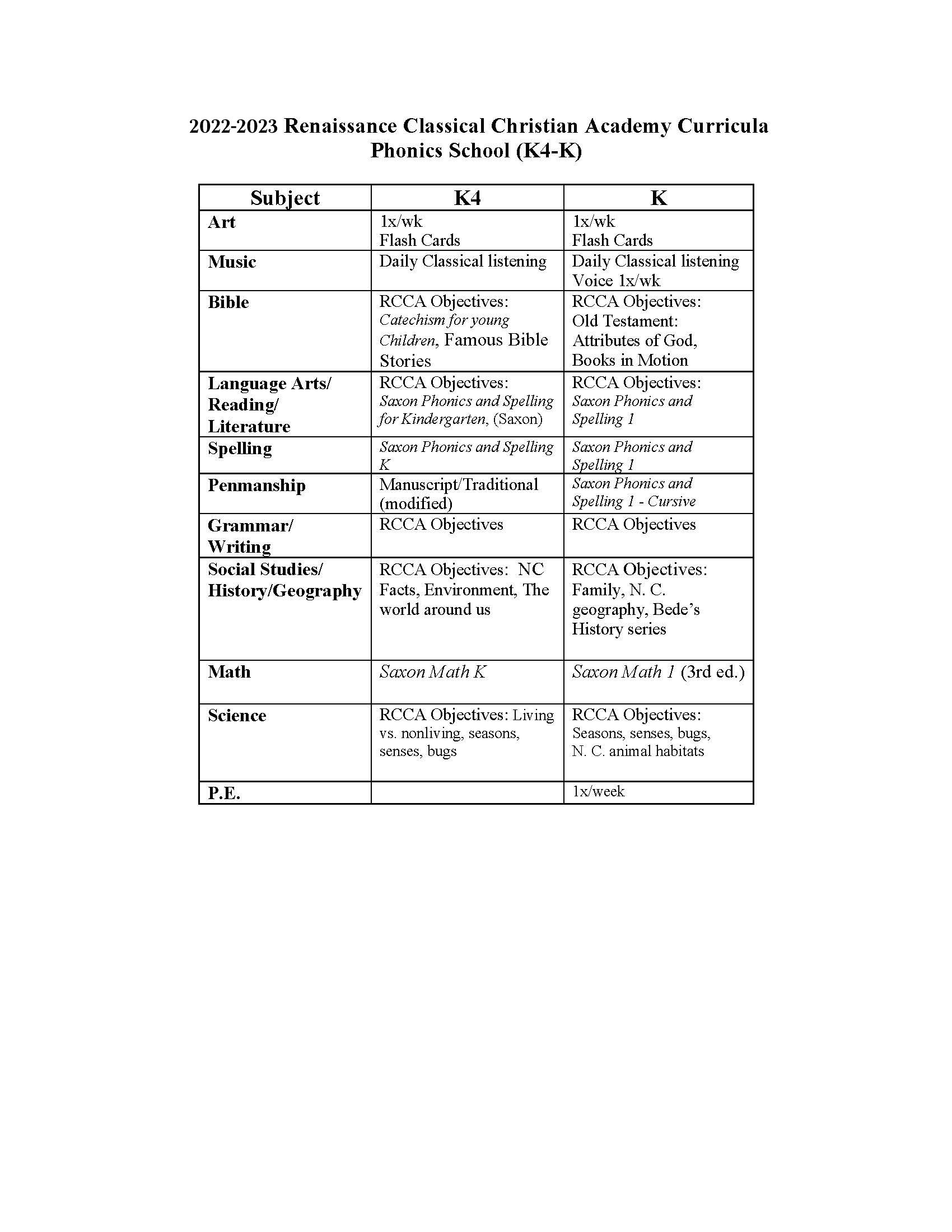 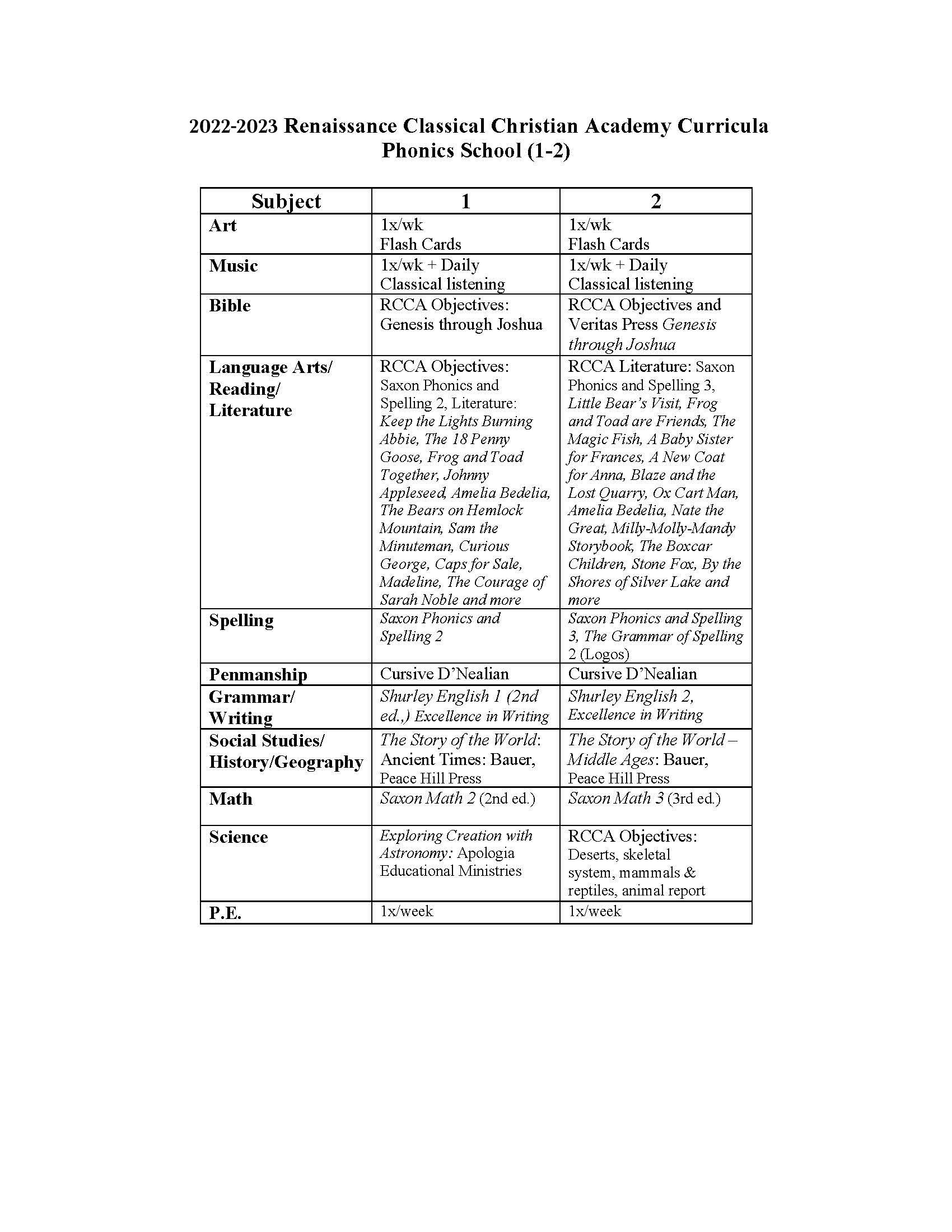 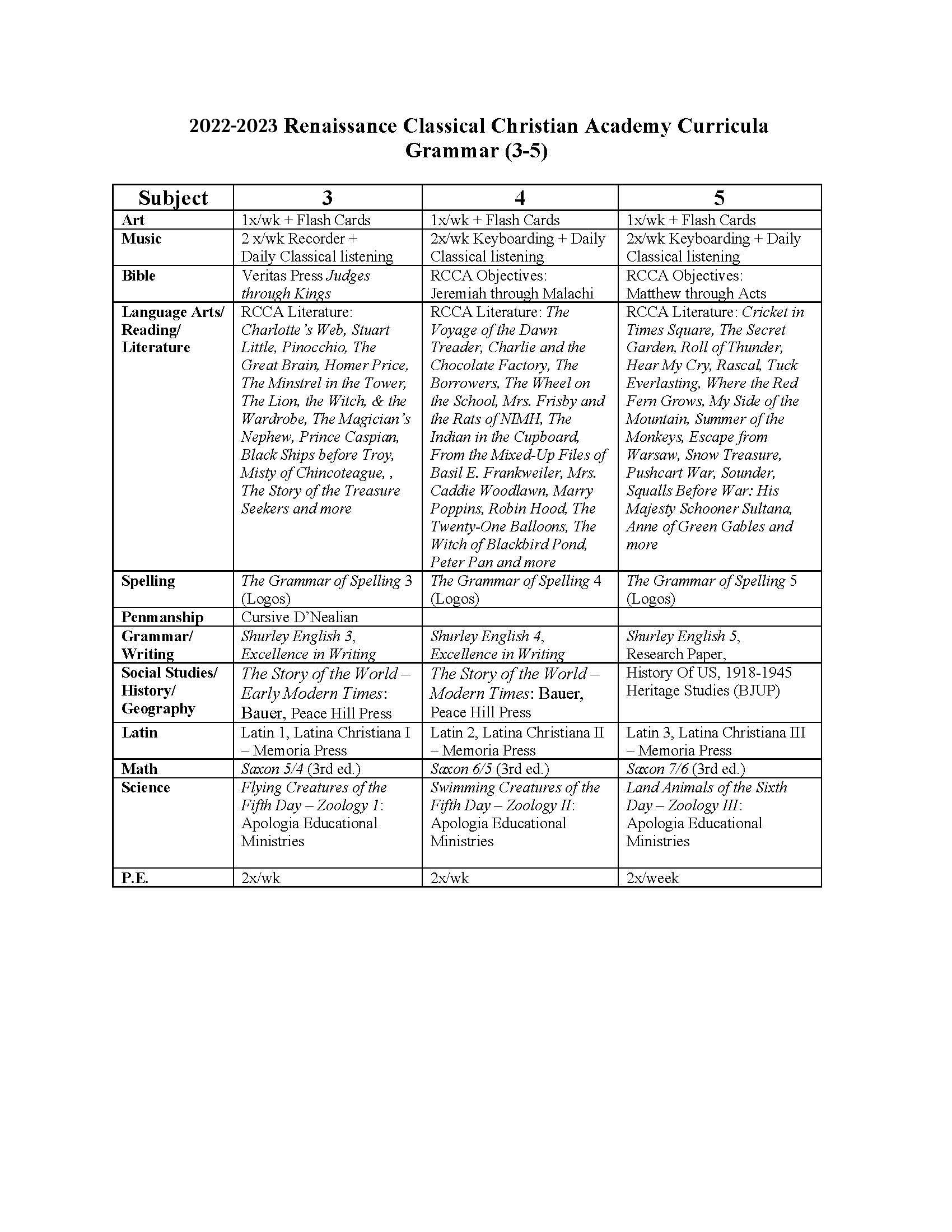 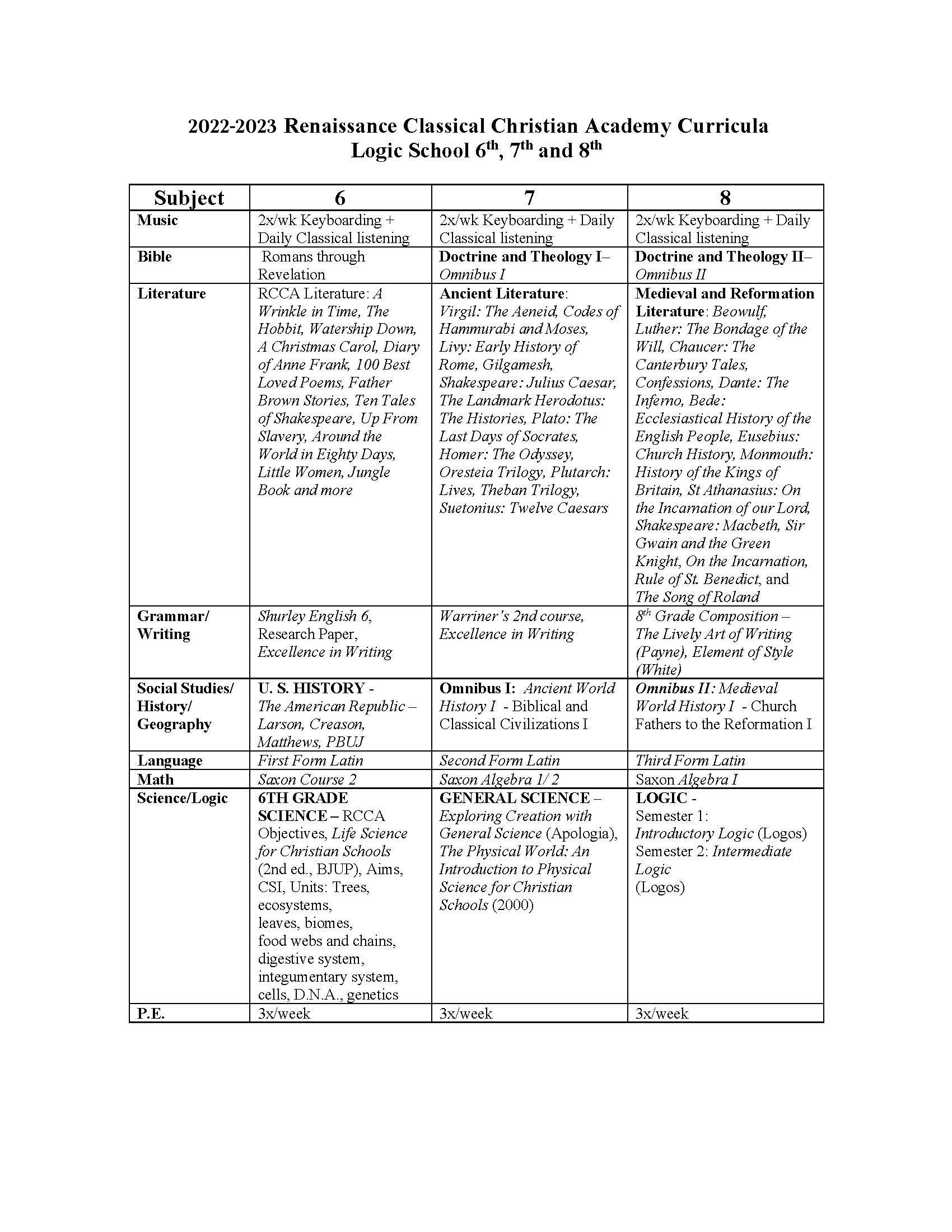 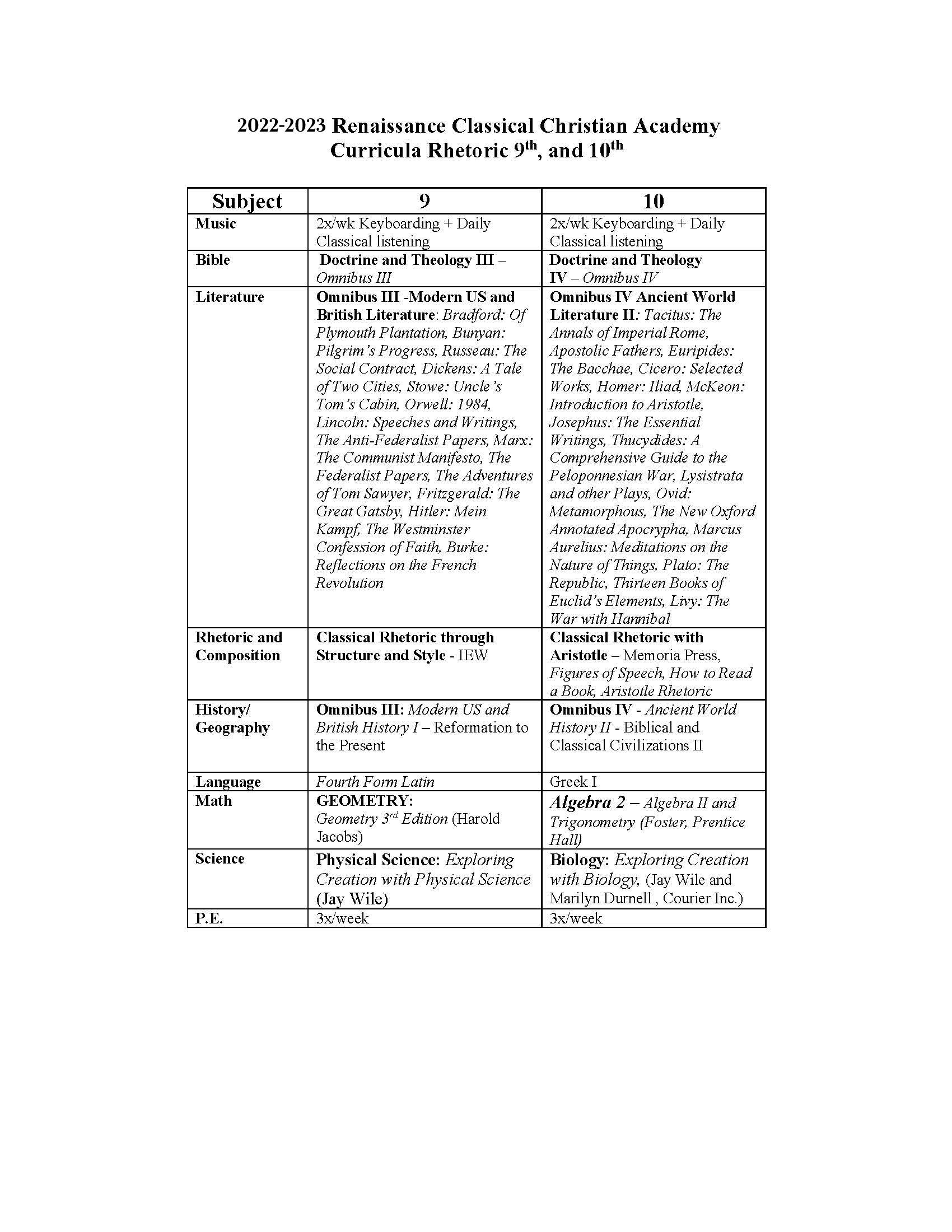 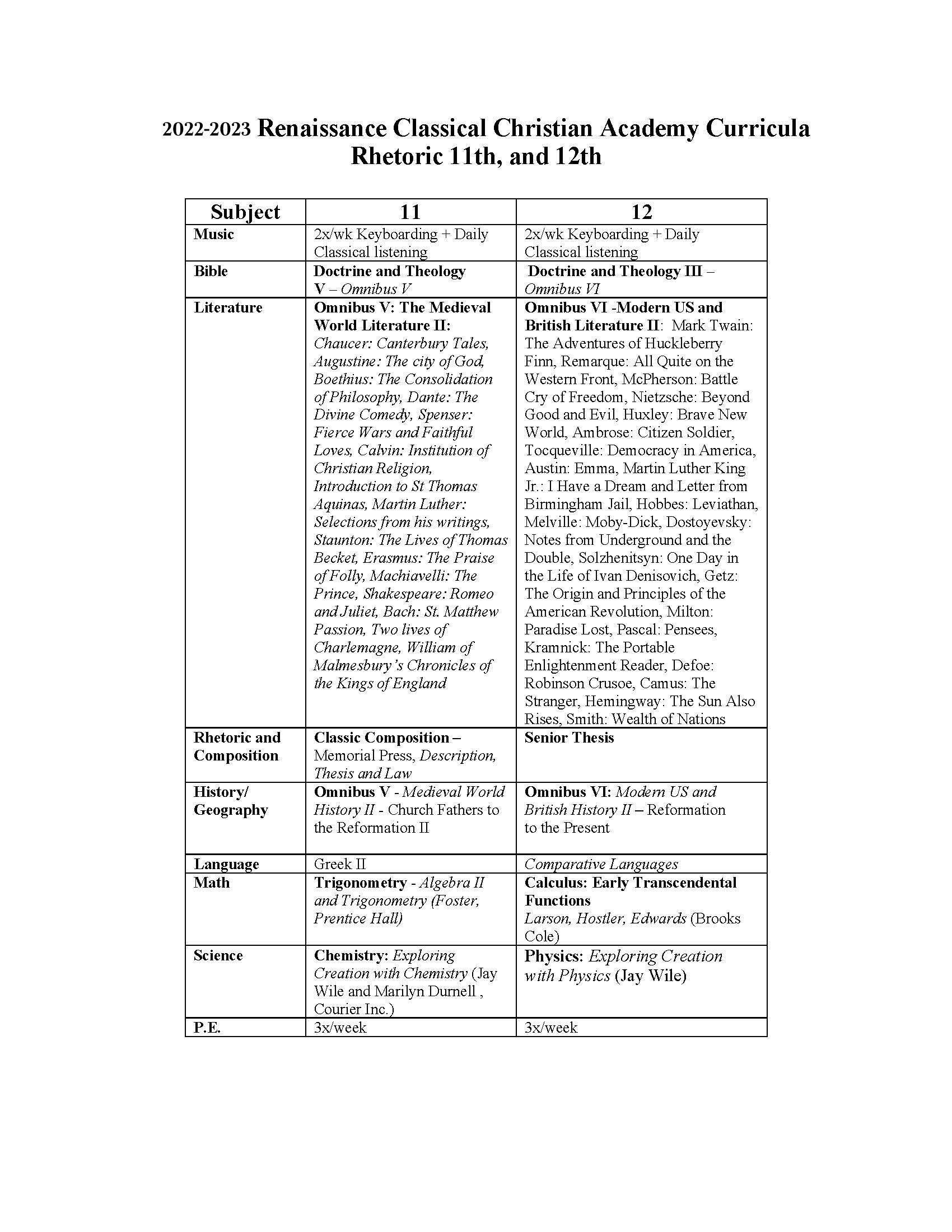